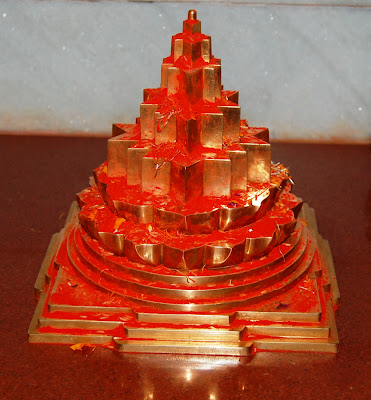 Yantra is a super science that evolved in ancient India. In Sanskrit, the word Yantra comes from Dhatu (root) yam which means holding the essence of an object, while the syllable tra comes from trana which means liberation from bondage. So literally, it means a symbol that enables us to perceive beyond bondage.
Goddess Laxmi is associated with a Yantra known as the Shree Yantra. There are two types of Shree Yantra. One is bhu (earth) and the other is meru (pole). Bhu Yantras are flat while Meru are pyramidal. The Shree Yantra is the symbolic form of all gods and goddess. It is believed that Lord Brahma possessed the Shree Yantra which is a multi-pyramid geometric grid. It’s a structure of nine intertwined triangles and can either be two dimensional or three dimensional. The Shree Yantra is mentioned in Vaastu Shasta as a source of positive energy and the Vedas also mention it as a cosmic zone. The Shree Yantra is regarded as the most auspicious and popular of all Yantras as it is believed that this Yantra generates prosperity through its inner cosmic power. As Laxmi is also known as Shree, the Shree Yantra is also called the Yantra of Laxmi by some Vedic scholars. (quoted from “Hindu beliefs & Rituals”)
Posted by Alakh Yogi at 10:50